The graveyard has been a cemetery since time immemorial. It was used as a provisional cemetery after the ‘Battle of Debrecen’ on 2nd August 1849, and since that time onwards the local public have known it as the ‘Russian Cemetery’ and the Military Cemetery.

From the beginning of the Great War, the soldiers of various nationalities who died in Debrecen hospitals were first buried in the town’s cemeteries belonging to religious denominations. The Military Hospital, enlarged with the Heroes’ Cemetery, was opened on 20th January 1915 to bury the victims.

Burials also took place here in 1919 and sporadically even in the interwar period. During WWII, soldiers, primarily German and Hungarian, who died in the local hospitals, and later those who died in POW camps, were interned here.

The memorials erected in the cemetery and the Mausoleum, built in a central location, pay tribute to the identified and unknown soldiers who died a hero’s death in the wars of 1848-1849, 1914-1918 and 1939-45 and are laid to rest here.

After several additional internments, conversions and partial reconstruction, the municipality of Debrecen renovated the cemetery in 2017-2018 as part of the Military History Institute and Museum of the Ministry of Defence programme, coordinated by the Őrváros Public Foundation, with the professional and financial support of the Debrecen Militarium in commemoration of the centenary of the Great War. 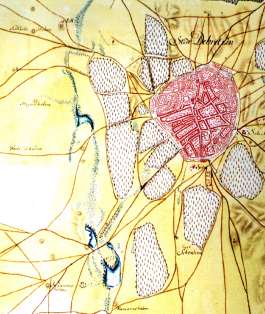 The location of the Military Cemetery was determined by the site of the 1849 battle of Debrecen between the handful of honved troops led by General József Nagysándor and the Russian troops, who outnumbered the Hungarians tenfold. The battle was fought 4-5 kilometres from the city centre: on the northern and southern pastures of Köntösgát (today’s Balmazújvárosi Road), on the pasture of Nyulas stretching to the Great Forest, as well as at the northern fence (entrenchments) of the Köntöskert and Csigekert parts of the town. The battleground could be accessed the fastest from the direction of the town, along what was then called Újvárosi main road, outside the Mester Street gate. This road began where the plot of today’s Reformed church is and ran along the western edge of Csigekert, along the line of today’s Military Cemetery; after the garden area it reached the Köntösgát dam, today’s Balmazújvárosi Road, which led outside the town across the bridge over the river Tócó.

Letter to the Editor